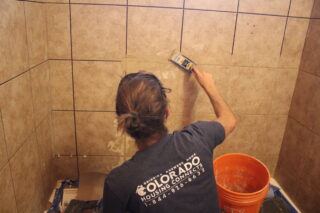 Arthur Saiz’s decorated career in the United States Army included time providing communications support and training during the Korean War, Vietnam War and Operation Desert Storm until he retired in 1993 after 36 years of service.

Saiz was stationed at Fort Douglas in Salt Lake City, Utah and at the Rocky Mountain Arsenal in his hometown of Commerce City where he trained around 2,000 soldiers on infantry equipment and communications. Today, the award-winning Veteran enjoys paying homage to his Native American roots by creating and selling jewelry and art. But even though the 83-year-old lives independently, he admits he needs help.

“When I was young, I never depended on anybody. I did plumbing, electrical work, built my shed,” said Saiz. “I like to do a lot of stuff, but I get tired — even when I clean and do work around the house.”

Saiz survives off his military pension and has wanted to expand and update his bathroom for years but couldn’t afford to do so until he learned of Brothers Redevelopment and its Home Modification and Repair Program (HMR).

This past summer, Brothers saved Saiz nearly $8,000 by performing bathroom modifications in his house that will help him continue to live independently and stay in his home. Saiz received plumbing services, grab bars in his shower, an entire new bathroom floor, new wall tile, an ADA toilet, a new vanity countertop and sink combo and much more through HMR. Brothers’ Paint-A-Thon Program also painted Saiz’s house and provided yard work services through volunteers from ANB Bank.

The HMR Program has operated in Commerce City since 2019 and has provided 71 households with home modifications and repairs that are aimed at keeping people in their homes. Commerce City’s Quality Community Foundation, which provides grants to fund various nonprofits that benefit Commerce City residents, is also a sponsor for the 2021 Paint-A-Thon season.

“I’ve lived in this home for 24 years, and I didn’t want to leave and deal with a landlord,” said Saiz. “I felt real happy when Brothers did all this work for me.”